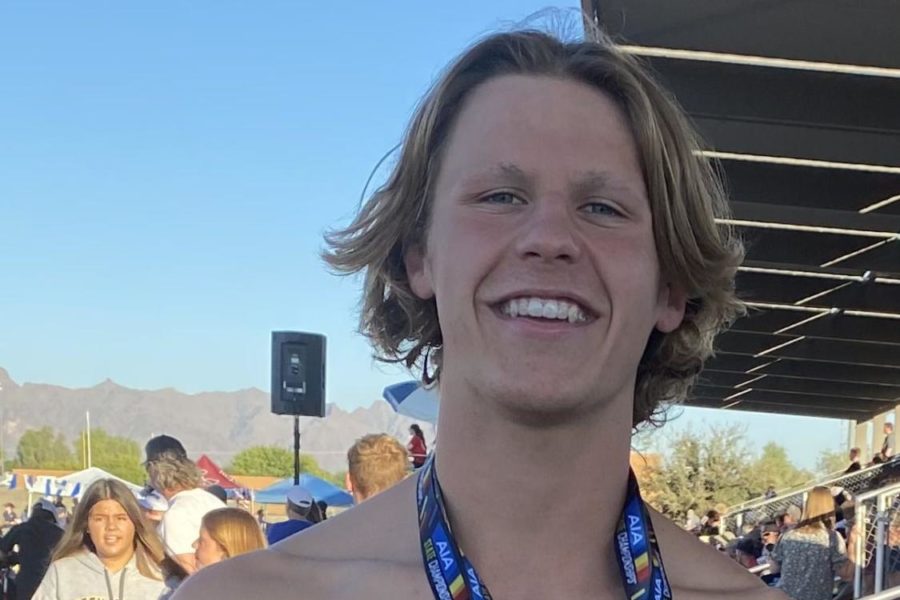 All are star athletes remembered for their athletic abilities and dedication to their sport.

But is it possible that another athlete will join that list in the future?

Maybe someone closer to us then we might think?

Senior Colby Raffel has ended his final season with Sunnyslope on a high note.

A high note that landed him at the top of the pedestal with eight out of the eleven of the swim team records in his pocket.

No star becomes elite without a rival worth the time and effort to get started.

Among the list of role models who pushed Raffel to his full potential is his older brother.

“I started swimming right around seventh grade, but I didn’t start getting competitive until freshman year when I raced my brother every single day at practice and at every single swim meet.”

Of course, his brother is not the only one.

This swimming superstar has also found inspiration in a certain Damon Pieri, his systos coach.

“Coach Pieri really supports me too by doing really good workouts he called ‘the good stuff.’”

Raffel also finds pride in the friends he has had surrounding him on his journey through the years.

“Dillon [Sophomore Dillon Woods] is also there at practice every single day with me and is just really nice, so I guess we motivate each other really really well and it’s really nice to have a person who understands my sport.”

His effort and dedication to the team has made a lasting impression.

One of his coaches, Cameron Licht, has depicted him as, “A double edged sword–” a title that perfectly portrays Raffel’s impact and relationship with his team.

This description perfectly embodies his skill and commitment to swimming, along with his “goofball” side.

“When I was on Sunnyslope Swim and Dive, it showed me that there was more than just your individual goals, like you have to be on a relay and you have to like count on each other and you’re there for each other every single meet and every single invitational and eventually districts and state.”

With his talent and liability to the team, Licht reassures us that, “the positive side has been more than the annoying goofball side.”

As Raffle moves on from his high school career, he will in no way be forgotten by those he has influenced as he always brings his goofy personality into practice while staying focused.

With such a chaotic personality comes many equally chaotic memories.

A certain memory many say they are not likely to forget any time soon is, “when he and his brother shaved the batman and superman logos on the back of their heads for swim,” said Licht.

There are many interactions throughout the years, and one-on-one with teammates that will also be remembered fondly.

Along with certain hijinks which comes naturally with high school.

Without a doubt, there are other rambunctious memories at practices or meets or even on the bus back from meets, either one-on-one or as a whole, that have made being part of this team with Raffel definitely a time to remember.

Just as his teammates and friends have been largely impacted by him, Raffel also has had his eyes opened as a result of them as well.

Raffel expressed that being part of the school team has shown him “a lot of good sportsmanship. It’s like when I was on my club team.”

While on club, he was able to focus on swimming individually, but being on the Sunnyslope team was an experience like no other.

“When I was on Sunnyslope Swim and Dive, it showed me that there was more than just your individual goals, like you have to be on a relay and you have to like count on each other and you’re there for each other every single meet and every single invitational and eventually districts and state,” Raffel said.

The team has meant a lot to him over the past four years.

“Being on the swim team means being part of the family. I mean, the quality of something is bigger than just everyday academic life and it’s by far one of the coolest greatest things I think you can ever experience,” he said.

He has not made a decision quite yet, but he does have a few options as to where his talent may take him next.

“My big choices are Austin-Texas or ASU,” said Raffel.

As we say farewell to our swimming star, and send our best wishes his way for his future, we remember the fond memories and great impact Raffel leaves behind.

Colby Raffel has left behind an inspiration to the future swimmers and a goal for many to try to accomplish.

As he came into this racing his brother’s times, it all came full circle as those to follow him now have new times to beat, ensuring his legacy on the Sunnyslope Swim and Dive Team lives on with us all.