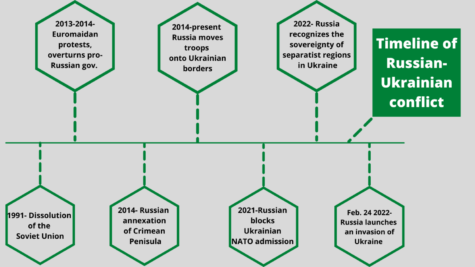 The mounting tensions between Russia and Ukraine officially turned violent on Feb 24 when Russia invaded Ukraine.

For many students, this across-the-globe conflict can be difficult to understand, so here are a few key details to help illuminate the conflict.

Since 2014, conflicts have continued to build – the Russian annexation of the Crimean peninsula, conflicts between Russian and Ukrainian forces, and increasing numbers of Russian troops being sent to Ukrainian borders – have all contributed to the ongoing crisis in Ukraine, in addition to the effects caused by old Soviet-era concerns.

In fall 2013, protests erupted across Ukraine in response to former President Viktor Yanukovych’s refusal to sign an association agreement with the European Union.

Violent protests filled the streets, and the European Union called for de-escalation or sanctions.

The EU brokered a deal with Ukraine calling for an interim unity government.

Yanukovych fled ahead of a vote on his impeachment, assisted by Russia. Yanukovych had been influenced by Russia, and the Ukrainian protests served to overthrow his pro-Russian administration.

While conflict built in Ukraine in spring 2014, Russia built a presence in Ukrainian Crimea by taking over government buildings and sites across the region and installing a pro-Russian government, led by Sergey Aksyonov, to hold a referendum voting for Crimea to ‘re-join Russia.’

Although the referendum passed, many Ukrainian and Crimean whistleblowers, along with members of the international community, denounced the referendum for voting inconsistencies and worries about validity.

The referendum was passed, and the Republic of Crimea joined Russia amidst outcry from the Ukrainian government.

Russian troops moved into Crimea and have maintained control over the region; Ukraine’s lack of resources and instability due to conflict made it difficult to regain influence.

The presence of Russian forces along the Ukraine border has been a significant source of conflict for years; both former President Petro Poroshenko and Volodymyr Zelenskyy both condemned the military presence.

In a statement in 2015, Poroshenko said the invasion was a direct “act of aggression.”

Also in 2015, the deputy head of the Committee on Defense and Security in Russia’s Parliament, Evgeny Serebrennikov gave a statement to a Russian news organization, saying, “We’ve heard many statements from… Ukraine, which turned out to be a lie,” regarding military occupations. Military clashes continued between Russian and Ukrainian troops through years of the Minsk Protocols ‘ceasefire.’

Conflicts began ramping up in 2021, as Ukraine expressed fears of a planned invasion.

Questions over Ukraine’s admission to NATO brought additional conflict in 2021.

Beginning in December 2021, the US attempted to prepare for a Russian invasion of Ukraine; while in Latvia, in December 2021, Secretary of State Antony Blinken said, “We don’t know whether President Putin has made the decision to invade. We do know that he is putting in place the capacity to do so … [w]e must prepare for all contingencies.”

A speaker of Russia’s Parliament Konstantin Kosachev said, “We don’t have any plans to attack Ukraine. We don’t have any heightened military activity near Ukraine’s borders,” to a Russian news channel.

The U.S urged Russia to pull back from Ukraine, back in early December, or face sanctions, but sanctions against Russia have proved ineffective up to now.

Reuters explained in December, “Russia has blunted the impact of sanctions imposed over its invasion of Crimea by reducing its borrowings … and maintaining … reserves.”

On Feb 24, Putin recognized the sovereignty of separatist regions of Donetsk and Luhansk, led by pro-Russian groups, in Eastern Ukraine.

Putin then announces an attack in Donbas in Ukraine, along with loud explosions in Kyiv, the capital of Ukraine.

Russia launches an invasion of Ukraine, “targeting the junta in power,” according to the Russian ambassador to the UN emergency Security Council.

What is important to note in this narrative, is that Russia is branding this as assistance to the Ukrainian people from an oppressive government rather than acknowledging it is invasion and war.